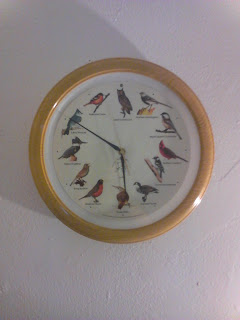 In 1998, one of my classy relatives gave me a bird clock as a wedding gift. My exwife hated it, and I didn't much care for it either...except that the owl at "12" always sounded like he was saying, "noon...noon..." It was an awful, annoying Cracker Barrel item that hung on the wall clashing with our nice furniture and framed posters/art.

I change my mind. I think I did like it.

When I left my ex, I did not seek legal counsel...mainly because I already had a lawyer for two pending DWI arrests. I didn't need two lawyers tag teaming my bankroll. I did at one point tell a homeless man who asked for change that I was going through 2 DWIs and a divorce at the same time...he gave me some change.

I told my ex she could whatever she wanted. She moved out of our house, and I moved back in. She left a mattress, a shitty futon, my cat and the forsaken bird clock. I was starting over...and I was fine with that.

When I bailed on the house and into an apartment for 5 years, the bird clock came with me. I hung it in my apartment, and left all the batteries in. I could tell when I needed to leave for work because of the woodpecker at "9".

When I lost the apartment and slept on a friend's couch, I put it in a closet. When I left Austin, I took it with me.

14 years later, my room has three things on the wall: framed Nirvana boxed set from W.White (TCB), a postcard of Seattle (where I want to move to) and the bird clock. It serves as a reminder to me that among all the stupid, stupid things that I've done...among all the shitty decisions...among all the hurt that I've caused other people that I'll never be able to reconcile...I made one choice. One choice that ruined me financially, shook me out of comfortable suburb life and turned my world upside down just so I could be happy. While it was a badly executed and poorly timed act, I don't regret it.

I look at that thing on the wall and it reminds me to never be comfortable with aspects of my life that I don't want there. Shake it up, John. Change starts with you.

I did finally take the batteries out that make the chirping and hooting noises. Fuck birds.