Ghosts of Breathalyzers Past

On September 12, 2012, I turned myself in to Travis County, thinking I would be held in county jail for a couple of weeks and then put on an ankle monitor or given a portable breathalyzer. As we know, I left Del Valle six months later. My assumptions weren't completely off base, however. I did, in fact, have to obtain the Smart Start IN HOM device. Awesome. 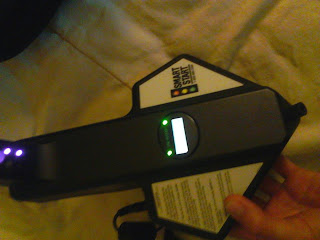 I have three time windows to blow into the device every day: 5pm-8pm, 10pm-12am and the kicker, 5am-8am. There is a removable plastic nozzle that I put on the device, and blow into in during each of these time frames. When I do, there is a camera that takes a picture of me doing so. Take that, clever alcoholics! Science, bitch.

Once a month, I go to the company outsourced to deal with the likes of me and have them upload 30 days worth of recorded BAC levels (blood alcohol content) and pictures, and then they send all of that to my probation officer. That means, if he's up for it, he can browse through 90 pictures that look like this: 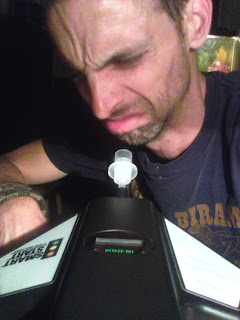 Disturbing, I know. Not as unsettling as the first picture I took where I actually was blowing into it. Now, I want everyone to see how long you can restrain your brain from making an off-color joke at my expense. Yeah, not long. I don't blame you. At least I only have to fellate the robot vacuum cleaner for 2 seconds at a time.

I had a breathalyzer on my car in the past 10 years twice...once for two years (late 2002 to 2004), and again from 2008 to the end of 2009, when I sold my car. The first breathalyzer had me blow into it for 3 seconds and then for 2 seconds I had to hum. It had a digital readout that let me know if the procedure was not followed properly. I saw it display everything from "blow harder" to "blow then hum". Once I thought it flashed "tickle the balls", but it was just my imagination. I think.

When I had the second one put on, I asked the guy at the shop, "Hey man, does this one have me hum when I blow and shit?"
"Oh no. It's much better than those old models. You just blow into it, then suck back real quick."
"Ah. Wait, what?"

This is not an improvement, sir. I don't think I like the evolution of this device. What's the next model going to have people do? "On this one, you need to blow into it and then reach around and put your finger in the hole in the back..."

My mother had a concern about me washing dishes and my latest alcohol monitor. She wondered if I handled glasses that had alcohol in them, and if it was possible for me to absorb some of the alcohol in my hands... No. I don't handle bar glasses, and even if I did, not a problem, I assure you. I told her that sounded like a flimsy excuse given to a probation officer as to why someone came up positive on their report.

Seriously, if anyone you know has a breathalyzer and they say they locked up their car because of mouthwash...they're full of shit. Hand sanitizer? Only if you were drinking it, freakshow. One guy in my group in treatment was a pathological liar...and he said he set off his breathalyzer because of taking Sudafed.
"Sudafed doesn't have alcohol in it, bro."
"Yeah, well, that's what happened, okay? You don't have to believe me!"
"Lighten up, Francis."

Three times a day, I am visited by these ghosts of breathalyzers past. My mind becomes flooded with bits and flashes of memories and past actions.

For a short time at the beginning, I would park my vehicle at friends' places so I could go downtown, drink, do comedy and whatever. I would then crash on the couch of these friends, and then leave the next day when I was sober enough to start my truck.

I would call in late to work occasionally because my BAC was too high in the morning, and I failed. Turns out you can do this repeatedly on misdemeanor probation as long as you're up-to-date on payments.

Felony probation is a different matter. The one year anniversary of my best friend's death had me car bombing my way into hot water with Travis County in 2009. I still couldn't start the car at 3pm the next day. I had to do an outpatient treatment program due to that. Ironically, I was a full-blown heroin addict at the time, so I rarely drank. But there I was in alcohol classes.

I think about these moments...and I am relieved at how easy probation is when you're not trying to get away with shit. If you're not a junkie, drug tests are cake. If you're not trying to drink just after 10pm so you can be sober again at 7:55am to blow into the fucking thing, it's barely a hassle. Hell, I'm a night owl. I get home at 1 or 2 in the morning after work, and after winding down and eating, it's 3am. The IN HOM gives me a reason to stay up until 5am, and because of it, 3-5 is my time to write/blog. So...thanks, Smart Start?

I will, however, say thank you, Smart Start for advancing your technology to using a camera instead of making me jump through innuendo-laden hoops as I exhale into your equipment. Let me know when you have an android app and an attachment for my phone.