I attempt to adhere to the principles in Buddhism, such as the Four Noble Truths, Eightfold Path and the Precepts, and I guess my meditation practice resembles that of a Zen Buddhist.

However, I don't really dig the sangha aspect of that practice...the community...so I suppose I don't necessarily embrace the group practice of meditation. Sometimes I feel like it can be too much of showmanship or one's image. "Can I pretend to meditate longer than the bald guy next to me?" "Ooh, look at me, I'm going 'om'." That's not really the reason I have to calm my freakshow of a brain or why I do it.

And then there's certain Asian traditions I just don't go for, so I guess I'm part of the Western Reform movement? Sure, why not.

And shit, man, then there's Taoism...the wu wei, or effortless action. Yin and yang...natural dualities in and around us, two sides bound together to make a whole. How does that fit in to how I believe or who I am?

I can tell you that I will, more than likely until I die, flourish in nontheistic "religion", as I have yet to be completely comfortable with anyone's view of a god. I will leave myself open to new views, and I will at least pretend to be receptive to these new concepts. Deep down, I probably will just continue to not give a shit.

In summation, I would have to list my "religion" as: Agnostic Western Reform Zen Buddhist with Taoist Influence.

Maybe. I still have 26 more blogs to go. 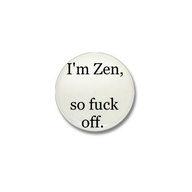