I went to Newgrounds, which has been a mecca of flash games and more since the late '90's. I've wasted many hours of productivity when working in a cubicle on this site. I was in the mood to kill zombies, so I searched "zombie" and there were 780 results. I proceeded to play several...Last Stand, Endless Zombie Rampage, Zombie Trailer Park...and so on. I have a massive headache now...but at least my desire to waste an assload of time has been satiated.

Half-Price Saturdays, every week without fail. Saw these DVDs next to each other in the clearance aisle: 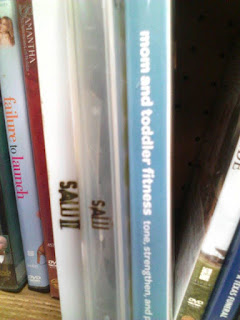 I bet all three are equally brutal. All four, actually, if you count "Failure to Launch" lingering there in the background.

I purchased "Constantine" for $1. I'm a huge fan of the comic...not really crazy about Keanu Reeves' attempt at the role of a blond-haired and jaded British guy. But it was a dollar. And demons, hell and stuff. And Shia Lebeouf dies in it (spoiler aler--oops, meh). The good outweighs the bad.

And it was a dollar.

I also bought Neil Gaiman's American Gods to motivate me to finish the William Gibson book I'm still attempting to read. Get off your phone, John, try fucking reading. Words With Friends may be Scrabble and require using your brain a bit, but it feels like a waste when I have a book in hand. It's almost like my brain is fighting anything that might need thought and concentration. Stupid brain.

On Facebook tonight, I received a couple of weird messages from friends and read some questionable status updates. My confusion subsided when it dawned on me that it's 3 AM Sunday morning...people are drunk as hell.

Mmmm...drunk facebooking. I need to keep a mental note of a few of these updates...I'm wondering if they'll be deleted by this afternoon.

I used to wake up hungover and go through my phone, deleting text messages and my call log...as if that would undo the emotional, slurry rollercoaster that the people on the other end of those conversations endured. Sure, out of sight, out of mind.

I made the decision to quit drinking the last time I deleted my cell phone call log. Personally, I'm amazed phone karma has not come back on me yet with numerous drunk dialings. Oh right...I changed my number on most of you. Good call, me.