You are Entitled...to be Recognized as a Douchebag

One thing that really bothers me is entitlement. One of my favorite sayings is, "Your overwhelming sense of entitlement damages my calm." Unfortunately, I have quite a few opportunities to say this every day, because this world is full of people who think they're owed something or that they deserve it.

I've blogged about empathy before, and I want to empathize with others as much as I can, but it sure is difficult to do when they're full of themselves and think they do what they want, like...say...park in the middle of some nice thick grass on the side of Lamar so they can go eat at Matt's El Rancho. 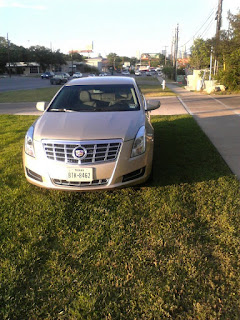 I like that it's a Cadillac, too. Apparently it's not enough to want to hate on them, they have to have a pricey luxury car to really rub it in. "Fuck those empty parking spaces over there. I would have to walk. I didn't buy this car so I would have to walk like a commoner."

Okay, that might be a bit much. But hey, whatever. I resisted the urge to let the air out of a tire or key the car.

A friend of mine (who knows me too well): "So you didn't do anything to the car damage-wise?"
Me: "No, man. I'm not like that anymore."
Friend: "Right...also, because the car was right on the side of South Lamar Blvd on a Saturday. Too public."
Me: "No...yes. Shut up."

I did want to convey that I was displeased with the driver's disregard for St. Augustine, so... 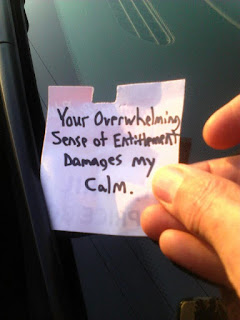 I think I'm going to get a bunch of business cards printed with that saying on it. That way, I can just silently present the card to a loud asshole on the bus...the guy talking on his cell phone while in line at the convenience store...and yes, leave them on the occasional automobile.
Posted by John Rabon at 5:11 AM