Now That Was A Show.

Esther's Follies does not do shows during ROT Rally weekend. If you've ever been downtown during ROT Rally, you can see why. Not a lot of people say, "Hey, I'm in the mood for comedy, singing and magic. Let's park way far away and go wade through a sea of bikers downtown." So Kerry Awn put together the Velveeta Room 25th Birthday Extravaganza, where we do stand-up on the big stage at Esther's. 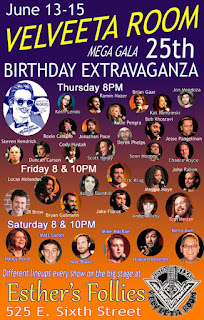 Great shows tonight. I was on the 10pm show.

Tonight was a personal success for three reasons:

First, I had a great set that included a bit I wrote in the past 24 hours that got a big response. The last time I performed I bombed, and I was going to do some of the same material on this show.  The best part of bombing is remembering why you sucked. I didn't connect with the audience last show. I performed AT them...that's what I remembered. This came back to me as I stared at my set list, about to go up. I put the list in my pocket and decided to try to connect with the crowd first...let the material just work itself out in my head as it came to me. It worked.

Secondly, I was able to hang out with some old comedy friends and joke around...smoke cigarettes, give each other shit, and just fucking relax. It didn't matter I wasn't drinking. We were just hanging out. It was fun.

The third reason tonight was a success was because a good friend of mine that I have not seen in years was there. He follows this blog and he enjoyed my set. A lot. I highly respect my friend's opinion, and to hear this from him just reaffirms the direction I'm going with my comedy and writing. It was highly encouraging. Thanks, brother.

Don't know when I'm going to sleep this morning. I love this feeling.
Posted by John Rabon at 4:37 AM