I just spent an hour writing a response to a political meme posted on Facebook that kept referring to "Obama's socialism". I wrote such gems as "most Americans can't even define socialism without the use of Wikipedia or the term 'commie'...so maybe they shouldn't throw the term around just because they listen to talk radio" and "this comes from the website of a guy who actually has a picture of Obama with a middle-eastern beard photoshopped on him, and he wants to be taken seriously."

I wrote my lengthy response (way longer than this entry) AT the guy who posted this because I remember him being an idiot and an asshole in high school. After posting my response with satisfaction, I paused for a second, then I took another look at the profile of my former classmate...and it's not the asshole from high school, who is a year older than me. It's some other douche who is two years younger than me, and I have no idea who he is. Don't remember him at all. This means he probably remembers ME as being the idiot and asshole. I'm sure he does now after my rebuttal.

So I unfriended him. 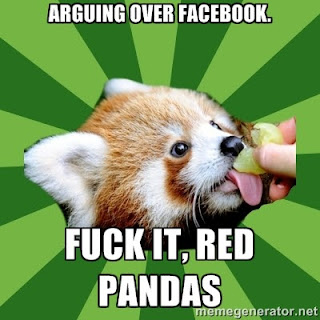