The Future is Here. Great.

Growing up, I remember being told what we could expect from advancements in computers and technology. While I was fascinated with an Apple II, I read articles on where computers were going...saw news segments on TV about new developments to look for in the automobile industry and with medical science.

"In the future, we'll have robots and flying cars and blah blah blah..."

Can you imagine what would have happened if a scientist or engineer correctly predicted the future and presented their vision to the public? They would have been institutionalized immediately and put on meds.

"In the future, we will use portable devices to keep in touch with others while ignoring other people physically around us. We will communicate to our friends with text, audio and video, but we will rarely see our loved ones face to face. This will be called 'social networking'."

"In the future, our society will have access to news and information from around the world...on a level that you cannot comprehend. People will spend hours and hours reading...reading captions under pictures of cats."

"In the future, everyone will have an outlet to communicate to the world that will be limited to 140 characters due to a lack of attention span of the populus. Individuals will use this mass communication tool to broadcast personal messages like, 'i am sleepy' and 'bored lol'."

"In the future, human beings will have a computer program that will add artistic touches to common photographs. Individuals will post newly-enhanced photos of say, one shoe...and title the photo 'Can't Find The Other One Grr', and the photo will be proudly displayed to the world as if they were Ansel Adams."

"In the future, people will spend all their time capturing moments they should enjoy but don't because they are too busy trying to frame the event properly on their portable device in order to share it with those who aren't there."

"In the future, there won't be flying cars. I don't know who told you that, but they're lying pieces of shit." 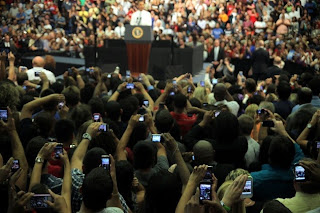