One Year, or, My Mother's Birthday


September 12, 2012...my mother picked me up in San Antonio and drove me to Austin to my "appointment" with a Travis County probation officer...where we knew I would be arrested and spend an unknown amount of time in jail. It was my mother's birthday. While she pointed out it was the first time in a long time that she and I spent time together on her birthday, I don't think that made the situation any less awful.

I had quit drinking before this, and the exact day didn't mean that much to me. I thought the date was arbitrary...that it should be about the mindset and the actual decision to quit. However, I told her that I wanted to make my sobriety date that day, 9/12/12, because the whole day was "sobering" on different levels, let me tell you. I told her I wanted to be sober for a year for her next birthday. I was just happy I was led away in handcuffs out of her sight. 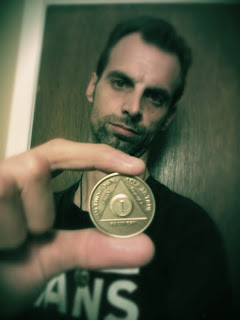 I've been to a couple of AA meetings last weekend, and I am going to a couple this weekend, specifically to be "recognized" for 1 year of sobriety...but it's not about me. It's to possibly encourage new people to keep on if they want to. This 1 year chip goes to my mom.

What they ask in meetings when you are recognized for 1 year clean and sober is, "How did you do it?" All I did was change everything. No big deal. Heh. Also, I had to fail and screw up just enough to eliminate all denial but not so much that it killed me. For some reason, I'm still here.

The most important thing I did was I made the decision to be done. I finally had enough. You might be thinking, "no shit." Yes shit. I had to stop lying to myself about quitting when I knew I'd want to drink after probation...or maybe I could still take pain medication when my back hurt from work or maybe I could smoke weed later once I'm done with everything because other people can...

No. No I can't. I was done. And just to be sure, the 6 months I spent away from everyone reinforced that decision.

To be completely honest, I did not do this with the 12 steps and a sponsor. I don't like broadcasting this in groups or treatment because I don't want to encourage other guys to say, "Yeah, AA is bullshit!" Recovery programs are like weight loss programs...just because a certain program doesn't work for you doesn't mean it hasn't helped others "lose weight." Alcoholics Anonymous and Narcotics Anonymous have helped a lot of people. And the guys I met in treatment who were anti 12-step are all either back in treatment or jail now. Seriously. I just avoid extremists. This is about me improving my life, it's not a competition.

So what did I do? I changed my thinking. I actually learned something that was poorly taught to us in the SMART Program. Cognitive Behavior Therapy lite. But, because I wanted to change badly, I read all the books available and focused on changing my thinking patterns in order to change my destructive behaviors. I spent my months of free time under lock and key focusing on the principles of Buddhism and meditation. I read the book, The Four Agreements, and I just tried to follow the four key principles of that book daily: don't make assumptions; don't take anything personally; be impeccable with your word; always do your best.

When I got out of treatment and into the real world, I fought becoming complacent and tried to be mindful of my attitude, behavior, mindset and motivation daily. I tried to improve myself every day. I tried to remember to appreciate the moment whenever I could. When I started my new job washing dishes, I worked my ass off. I still try to do my best. I'm thorough at work...because I'm not in a rush to get finished to make it to the bar before last call.

I am on pace to pay off probation in time by the end of the year. I'll be finished with probation next March. I do comedy when I can. I am funny sober...and I enjoy myself when I am around old comedian friends and when I perform.

I make less money than I have since the 90's. I am also at peace with myself and happier than I have been in a long, long time. I try to be completely honest through this blog because getting thoughts out of my head onto this blog puts me at ease.

I like myself again, and I could care less what you think of me....as opposed to not so long ago when I really cared what everyone thought and I didn't like me at all. I'm fairly sure those things are related, don't you?

I still have a long way to go, but don't we all?

I don't think I'm in any position to give advice to anyone...other than to give you a nice playbook of what not to do in almost every situation. "Hey, here's what I did, and it sucked!"

Follow your own path. Make a real decision and go from there...but you have to be in a position where you are truly honest with yourself, because that way you'll know what you have to do and when you're just bullshitting.

If that makes any sense to you, then explain it to me later, because I'm still trying to grasp it.

Oh yeah, and remember to breathe.

Happy Birthday, Mom. I love you.