I had Lucy for 12 years. She was a little black Manx cat with plenty of attitude and tolerance of her boozy owner. She was an amazing little creature.

When she became sick, she hid under the futon and sat in her own urine and feces. And rather than take her to the vet, I debated what to do while I continued to use heroin and not deal with anything. It was a sad, disrespectful way to treat a beloved pet...doing nothing.

The guilt, shame and regret of this broadsided me while I was in rehab over a year later when I vocalized my feelings in my small group. It must have been an interesting sight to see me do so to a group of hardcore drug addicts, some of whom were federal criminals/dealers with the Mexican Mafia (two are still friends of mine). My counselor believed I was actually projecting guilt from hurting friends and family, but no, I'm pretty sure I felt worse for not helping Lucy than anything else I had done.

Time passed...I resolved my guilt, worked on myself, confronted fears and so on and so forth. After I was in a position to take care of myself, I began to have the urge to be a pet owner again. However, I wasn't living somewhere that I found it appropriate to be a cat owner. I was either in a sober house (no pets) or renting a room from someone.

I found myself able to adopt a cat this month after 4 years of not having one. I wanted to support Austin Pets Alive!, and I didn't want to go the kitten route. I stopped in at the Hancock Center Petco where APA had a little "cat booth." There were a couple of outgoing felines there, but the one that caught my eye was a Torbie hiding in a little cubby that wanted nothing to do with me as a stranger there. I'm not sure if I fell for her playing hard to get or if I just related to her general disinterest in people, but I knew that was the cat for me. Her description read: "I can be a bit shy at first, but once I get to know you, I really love to hang out and gossip!" She was also a long-stay resident, most likely because she wasn't one to do the song and dance in front of prospective owners. The Austin Pets Alive! staff member was excited that I wanted to adopt her, and she said that the cat in question was a sweetheart and to be patient with her.

I was happy the trip from the Hancock Center to Sandstone Apartments was fast, because Marla sounded traumatized in the pet carrier. I let her out in my place and she immediately burrowed under the couch...where she didn't move all night. I called to her, and I talked her ear off most of the night. Having her there was beneficial because technically now I wasn't talking to myself anymore. Friends asked for a picture, so I sent them this:

I wanted to be patient, but I was concerned that she needed to eat, drink, pee and poop at some point. I tilted the couch on its back, and since there was no lining underneath it, Marla climbed inside the couch...but at least I could see her now. She let me pet her while she meowed in a very concerned tone.
I went back to Petco to get suggestions from the APA rep. She suggested moving her to the bathroom as it's a smaller space. It would be easier to adjust to as opposed to the big open area of the living room/kitchen/bedroom. She also mentioned that if she still wasn't eating, try giving her Fancy Feast as it's basically kitty crack. As I skated back home, I didn't like the idea of picking her up by her scruff and moving her to the bathroom. In my mind, she was still in shock from the move, and I figured grabbing her would just freak her out more.

I arrived home, and she was no longer in the couch. In fact, she had disappeared. She was not under my bed or the dresser. I don't have much stuff...there's no place really to hide. I finally found her. She was behind the toilet...she'd already found her way to the bathroom without encouragement. Weird. I moved her food and the cat box into the bathroom as well as the cubby I bought her that was identical to the one she slept in at Petco. It took only a couple of hours in there for her to eat some and use the cat box. By the second evening, she was letting me pet her as long as I was sitting down. If I stood up, I apparently turned into a big scary monster. 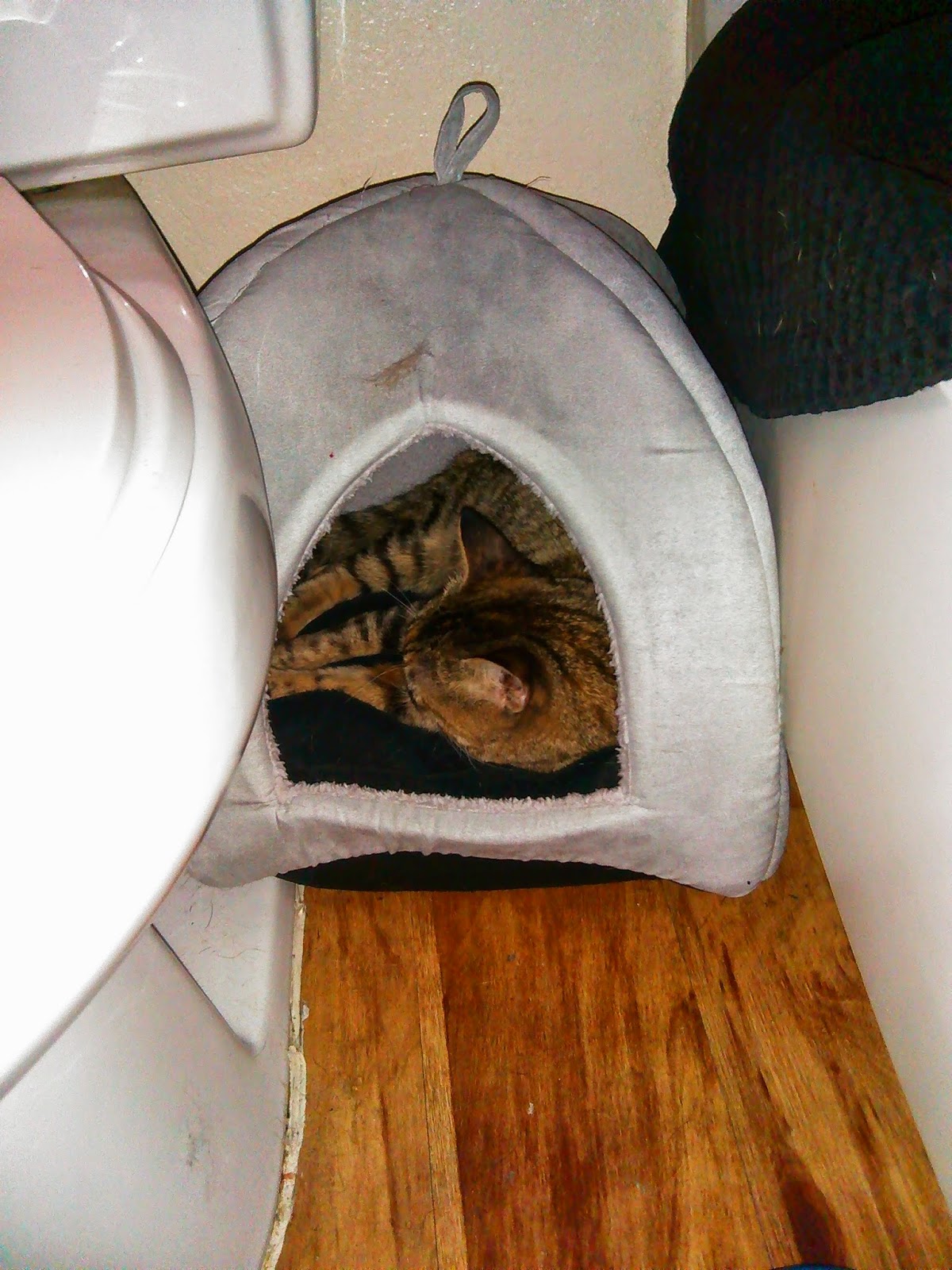 By day three, she was tired of the bathroom and was ready to brave the great big outdoors, aka the apartment. She spent the majority of the time in her cubby, but she still found her way under the couch once the sun came up. I fixed that by removing the pegs so that the couch sat flat on the floor. Marla switched to just hiding behind the curtains and looking out the window at night.

Marla has made progress every day. During the day she sleeps in the cubby, occasionally giving a look if you HAVE to walk by and wake her. She is very active at night, especially when I get home between midnight and 1 am. She requires me to pet her quite a bit, and then I watch her eat. She used to meow just when she was distressed, but now it is very conversational, and it's a hesitating shy meow, and it's the most adorable sound in the whole damn world.

I do have an issue with her not letting me take her picture. I can only get pictures of her facing the opposite direction or in motion, like these:


Maybe she wants me to not turn into someone who Instagrams every single thing she does. Maybe she's a diva. Maybe I have a phone she disapproves of, and she's aware that I should switch from Cricket to a different provider. Whatever the reason, it's fine. I'm just happy she really likes me now after being here a week. I've missed this feeling. I've missed being a cat owner.

If you're looking to adopt a pet, I highly recommend Austin Pets Alive!. They really care about their animals, their staff is friendly and knowledgeable, and they have a whole range of cats and dogs that need good homes. If you can't adopt, feel free to donate.

Thanks, Austin Pets Alive!, and thanks, Marla (APA name "Beth").


UPDATE: She has discovered the furniture. She jumped up on my bed twice last night to lie beside me, but as soon as I woke up and saw her, she meowed a cat expletive and ran off.

Also, she has claimed the chair as her own. Because of this, I was able to get a picture. Look how happy she is being photographed: 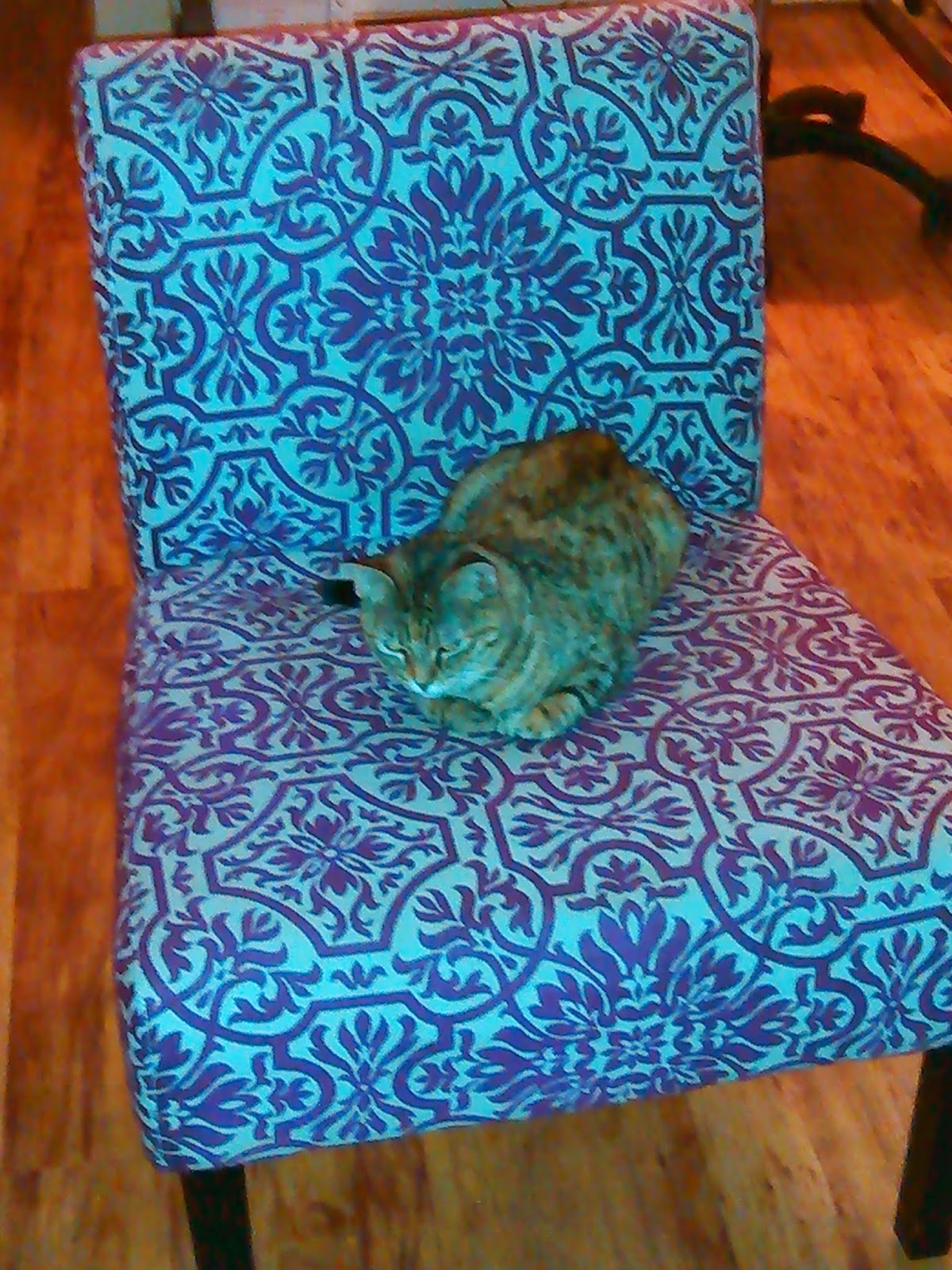